I always loved rice pudding as a child, creamy custard studded with raisins and topped with a good sprinkle of cinnamon.  But the rice itself was kinda drab.  A few years ago, I found a recipe that caused a rice pudding revolution in my kitchen: it used sweet rice which is a white short grain oriental rice.  You could substitute Arborio rice if you like.  I buy this rice in oriental grocery stores but I think Wegmans may carry it too.  Each grain absorbs the milk as it cooks and releases a lot of creaminess as well as providing a soft squishier rice that gives the pudding a more blended feel than my mom’s usage of long grain rice that stayed firm and separate from its pudding surrounding.

This recipe is naturally gluten free.  No one eating it will think, “Oh, darn, another of those weird GF recipes!”  They will just think, “I wonder if she will think I am piggy to want seconds of this?

I think in a pinch you could skip the second part where you briefly bake the pudding but I never do, I think it helps the pudding form the best texture.  Do sprinkle the top with cinnamon unless it is something you despise.  I recommend whole milk as it makes pudding taste so good but if you prefer two percent that will work.  I do not recommend skim milk for pudding. Ick on the texture and flavor of such a mutant pudding!  And this recipe is great with chopped dried apricots, dried cherries, golden raisins, or even currents or in it instead of raisins. My original recipe had lemon peel and apricots in it. Recently I put a few long orange peelings in it and a cinnamon stick while it cooked on the stove top which gave it a delicate orange flavor which played well with the raisins. So, you can alter it to suit your mood and your ingredients. 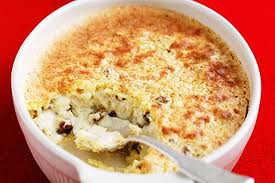 This snowy weekend adds more really cold days.  What could be more comforting after a chilly time shoveling than a bowl of wickedly creamy homemade rice pudding?

1/3-1/2 cup granulated sugar, this depends on your sweetness needs!

A good sprinkle of cinnamon

Rinse the rice in a strainer briefly, place in a heavy bottomed 1 ½ quart saucepan, pour in the milk (4 cups) and stir frequently as it heats on medium to a bubbly simmer.  Add the raisins and turn down the heat to low, cover and cook 25 minutes.  Be sure to stir it every 5-9 minutes to separate the rice and keep it from scorching on the bottom.  Add the sugar, stir well.  Mix up the egg yolk and whole eggs in a bowl with a whisk and add in some of the hot mixture; maybe 1/3 to ½ cup.  Dump it all back in the pot and stir well.  Turn off the heat and add the vanilla.

Heat your oven to 300 degrees. Butter the bottom and sides of a low ceramic or glass baking dish. I like an oval myself, that shape is what my mom usually used!  Pour in the pudding, removing any lemon or orange peel and the cinnamon stick if you used such and sprinkle it well with cinnamon to dust the surface.  Bake for 20 minutes.  Sometimes I put it in a hot water bath created with a 9×13 cake pan and some hot tap water.  This can produce lovely delicate custard if you don’t mind the extra fuss.

It is tasty warm and wonderful the next day.  Some people guild the lily with toppings of whipped cream, grated lemon or orange peel or even whipped mascarpone cheese.  Up to you how you dress it up!  I occasionally serve a homemade cookie on the side for added crunch value.  Enjoy!

One thought on “Not Grandma’s Rice Pudding”