Rhubarb is plentiful so it was a good choice for my first adapted gluten free pie recipe years ago. This is my favorite rhubarb pie and my go to recipe for a great spring dessert. 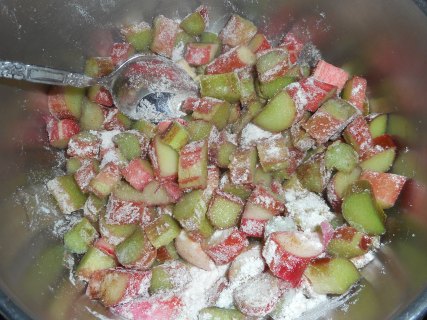 This is an easy pie even though it has several steps.  It is different from the usual rhubarb pie because the texture is a bit closer to a crumb cake, no wet, slimy texture and no ultra sour flavor.  I think this new version tastes as good as it did when I made it with wheat flour.  This GF crust will work for any pie you wish and the GF crumb topping is great for any crumb pie topper.  What I am giving you is my mixture of three recipes with some small modifications over time to create one of my favorite GF pie recipes.  I know it has several steps but each one is easy and you can use these crust and crumb recipes for other pies.

I like it because it has a great texture and the flavor is complex but subtly rhubarby.  It isn’t really soft or all that custardy but more cake-like in texture. It is a game changer of a rhubarb pie. I promise you that!

Spray a 9 inch metal pie pan with cooking spray, dust with white rice flour. I must confess I forget this step a lot of the time and it doesn’t seem to matter much….

Mix dry ingredients in bowl of stand electric mixer.  Add butter and mix until crumbly and resembling coarse meal.  Add egg and juice. Do not leave out the juice; it is critical to the crust texture and structure!  Mix until it comes together into big chunks.  Shape the sticky mess into a ball with your hands. Put it on a crust sized piece of wax paper (14 x 14 inches more or less), flatten the crust ball some; put on top of it another piece of wax paper and chill it all in your fridge 15-20 minutes while you chop the rhubarb into ½ inch chunks.

My sister Karen bought me one of those pie crust plastic bag thingies; has a zipper around the edge.  By OXO: I love it; it works better than wax paper which can get soft and tear as you roll out the crust.  King Arthur Flour sells an inexpensive one on line. I highly recommend you get the OXO version for making scratch pie crust.  Or maybe improvise with a sheet of heavy duty plastic! Strong enough to work with the rolling pin and better than wax paper.

Mix with dry mix made of

Roll out pie crust in a pie bag or between the two sheets of wax paper, try to get the thickness even, no thick middle! Peel off one side of paper and place in pie pan, centered.  Remove other slice of wax paper.  Crimp edges all around.  Fill with dry rhubarb mix.  Pour the following wet mix evenly over this mixture:

Sprinkle the top of the pie with the crumb mix; use as much as you like.  I like about 2/3 of the mixture.  Up to your personal taste… It sinks into the rhubarb and wet mixture to create an almost cake like texture and the crumb crust adds lots of sweetness and eye appeal.

Bake in a preheated 375 degree oven for 55-60 minutes until bubbly and the crust is light brown.  Cool at least 2 to 4 hours before serving at room temperature.

This post was originally published in the late spring of 2013.  I revised it somewhat since then.  I have made this pie many times in past years to rave reviews.  One of my friends had it for dessert at my house and said it was the best pie she had ever eaten, gluten free or not!  Spring is rhubarb season.  Go forth and make pie!