Apples, a favorite American fruit and they are the main ingredient in America’s favorite pie.   This crumb topped pie is easier than a two crust pie. I gave you the amounts for a 9-inch pie; I myself generally make it 10 inch; use 10 cups sliced apples and higher end of amounts of sugar, tapioca and spices.  Bake 60 minutes.

I put this pie together in a few steps; make the crust dough; put it in fridge to chill while I peel, slice and cut up the apples. I also throw together the crumbs before rolling out the pie; you don’t need to rinse the mixer bowl from the crust then.  If you plan to prebake your crust those ten minutes of baking the empty pie crust are also a good time for making the crumbs and preparing the apples too!  Each step is fairly easy but the results are spectacular.  Of course, you could buy a readymade unbaked crust but this crust I use is really tasty: my mom never believed it was gluten free!  This disbelief of hers was proof of the great flavor and texture of this particular basic gf pie crust.

It goes without saying that this pie is great with a slice of vanilla ice cream.  Winter is still a good time for an apple pie but by spring the apples are iffy, and I stop baking pies with them.  Be seasonal whenever possible when it comes to fruits, and you will get the best flavor and taste in your fruit-based desserts. 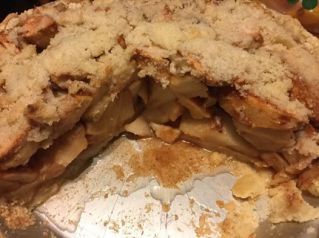 Mix dry ingredients in bowl of stand electric mixer.  Add butter and mix until crumbly and resembling coarse meal.  Add egg and juice.  Mix until it comes together into big chunks.  Shape into a ball with your hands. Put it on a crust sized piece of wax paper (14 x 14 inches more or less), flatten the crust ball some; put on top of it another piece of wax paper and chill it all in your fridge 15-20 minutes.

Roll out the flattened ball into a pie crust in a pie bag or between the two sheets of wax paper, try to get the thickness even, no thick middle! Peel off one side of paper and place in the pie pan, be sure to center it.  Remove other slice of wax paper.  Crimp edges all around.

8 cups thin apple slices from 8-9 medium-large sized apples, I like a mixture of yellow delicious and at least one other cooking variety; red Rome, Jonathan, empire, Courtland, or any tart apple you like to bake with. Note: I have made it just with Cortland or with Golden Delicious apples; excellent pies!

A good sprinkle of ground nutmeg

A small sprinkle of ground ginger

Finishing directions: Sprinkle the top of the pie with crumb mix; use as much as you like.  I like about 2/3 of the mixture.  Up to your personal taste…  Bake in a preheated 375-degree oven for 55-60 minutes until bubbly and the crust is light brown.  You can cover the pie loosely with aluminum foil for the first 30 minutes.  I bake my pies at the lowest possible level shelf, so my crust gets crisp but if you have issues with soggy bottom crusts; prebake your crust for 10 minutes; then fill and bake immediately.

Cool the pie at least 3 to 4 hours before serving at room temperature.

The crust and crumbs are from Annalise Roberts’ great cookbook: Gluten-Free Baking Classics. My filling is slightly different.