Camping can be fun and relaxing.  We go most every summer.   This is tent camping at a state park, a place with a real bathroom with running water!  You park your car and empty it and set up the tent ten feet from your car.  Picnic table and fire pit provided. But we cook all our food, no running out for breakfast at some local joint like many campers do….so GF cooking would be part of the deal. We went camping last weekend at a lovely state park; Ricketts Glen; incredible waterfalls to hike around!  Some things were just as they normally are, like grilling proteins such as shish kabobs, baking potatoes in the camp fire, bacon for breakfast and lots of fresh fruit. 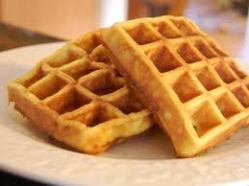 But there were some GF recipe issues so I had to adjust some of what we ate. It wasn’t that problematic after all; more of an issue that one person did not eat meat so we had to segregate the bacon from the fakon – weird looking fake bacon that I did not try.  Maybe it tastes good but I will pass! Before we went I did some thinking and some research on how to make my favorites GF.

The usual buttermilk waffles I make in my antique cast iron waffle iron had to become GF.  I found a recipe that seemed do-able; I made them up as pancakes at home earlier that week.  But they were kinda stiff and dry.  I had to re-think them.  I had followed the recipe closely and it used water and buttermilk powder. I realized that real buttermilk would taste far better and buttermilk is a smart milk for camp baking. It is sturdier than regular milk and can exist in a cooler for 2-3 days and yet stay edible. And because waffles are naturally supposed to be crunchy, well the recipe worked very nicely. There is some cinnamon in them which helps with the flavor.  And all four of us loved them especially someone who is a cinnamon freak!  I brought some homemade grape syrup which was awesome poured on top.  Breakfast waffles – GF, Check!

And then there was protein; easy to do GF so I will not even get into a lot of detail there.  Suffice to say marinated salmon steaks, potatoes cooked in coals, corn on cob in husk on grill top.  MMMmm.  We also did shish kabob which is also GF by nature.  Just know that if you should need to flour any meat or fish, white rice flour works fine.  GF Protein – Check!

Sides: we had those baked potatoes and then the second night I made a wild and brown rice pilaf on the camp stove.  Easy and tasty; I added a bullion cube, diced red onion and some dried parsley to it.  I have also made quinoa on a camp stove, not hard to do either and it cooks faster than brown rice. GF Sides – check!

And the most problematic item was the cobbler.  We always have blueberry cobbler when camping as we both love blueberries and cobbler.  But I had tried some GF cobbler/crisp recipes with no real success.  The one I made this weekend was a muffin mix that said it could sub for a cobbler in a pinch and it was fantastic; light and fluffy and yummy.  I pre-made the mix for the cornstarch and sugar to cook the blueberries in and I premade the cobbler mix (sealed in baggies with recipe written on the side with a black sharpie pen).  We beat the eggs up as much as muscles could do and added that as well as a bit of melted butter and some buttermilk to the dry mix.  Stir well and pour over the hot fruit; it had to cook extra long on the fire as someone wanted extra cobbler topping and it nearly filled the pan to the lid.  We heaped hot coals on the lid and it finally completed the top layer. Next time I am not listening to him on that issue!  GF Dessert – Check check!

I should mention that on Friday night my best friend made a dump cake full of jam and chocolate, baked over the camp fire and served with whipped cream and Kailua.  She used a GF cake mix.  It came out sort of molten like a hot pudding. It was very tasty if kinda sweet.  And it was so supportive of her to bake GF for me!

So to reiterate: I found great easy recipes for GF waffles and cobbler.  Both as good as any you will find made with wheat.  We ate great protein and tasty sides.  I did make sandwiches for lunch using some okay GF bread.  I still haven’t found the perfect GF sandwich bread but someone gave me a new recipe I must try – she said it makes great sandwiches…. I live and hope for a success story on that item and soon as I really miss sandwiches and rolls.   My friends did not mind eating my GF cobbler and waffles and it was not any more difficult to take with us or cook on open fire.  So feel free to camp GF: if you want my waffle and cobbler recipes ask and I will post them soon.  Peace and happy camping!!

Originally posted June 21, 2013.  I went camping again last fall and the waffles were fantastic. I have made that cobbler again and it works wonderfully with many kinds of fruit. And, I have a new favorite pancake recipe; I will post it soon.