Been wanting to make an Italian bolognese sauce for a while, the real deal, slow cooked with whole milk and red wine.  Those sort of recipes take time and love.  Saturday I had the time and I was making it for a date with my guy so I went for it.  Instead of beef my protein was a mixture of ground venison and pork. Otherwise I followed the recipe I found in a cookbook by Giada for a spicy version which looked interesting.  It was supposed to be made with lamb but I had that meat in the freezer and I thought venison might be good in a spicy tomato sauce. I have a different recipe that is mild which I use with ground beef.  But goin’ spicy this time!

A bit more than two hours later the bolognese sauce was done.  While it simmered I made some homemade pappardelle pasta (shaped like wide flat ribbons) to serve it with; been a long time since I made my own gf pasta. Well over a year ago…maybe as much as two years. My pasta was tender but had a chewiness that went well with the sauce. It was a perfect match. I let the noodles cook in the sauce for a few minutes; makes for the best flavor. The bolognese sauce was somewhat spicy, slightly creamy and very flavorful.  This recipe is a keeper!

We had some delish pan roasted Brussels sprouts with a nifty horseradish sauce. I know…that sounds weird but it was really yummy. My guy took home leftovers of the sprouts and sauce…he loved it!

This makes a big pot of sauce and you can freeze some of it, share it with a friend or eat it later on in the week.  I used some fairly basic red wine we bought up in the Finger Lakes Region of NY, no Chianti in the house.  It worked just fine. Improvising is the heart of Italian cooking, at least at my house it is! 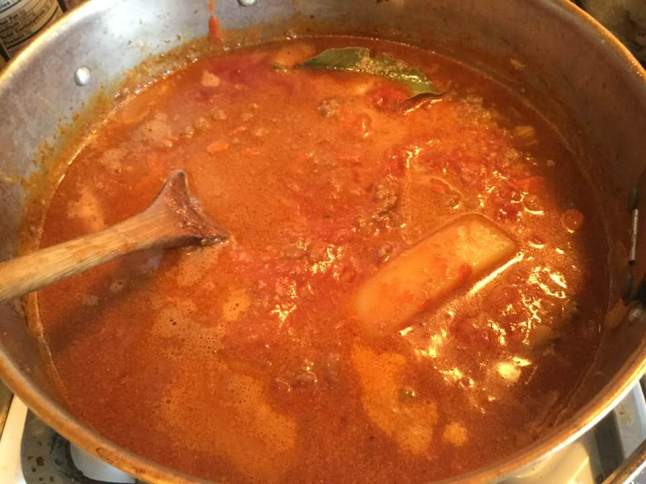 2-4 Tbsp. tomato paste; Use less if you use double strength

Instructions: Heat a heavy bottomed large sauce pan on medium heat add the butter and oil, heat until butter melts. Add onion, carrot, celery and ½ tsp. salt.  Cook for 6 minutes, stirring often, until onion softens but isn’t browning. Add the meat; brown it for about 5 minutes; use your wooden spoon to break up the meat and turn it.  Cook until no longer pink.  Add garlic chili powder, red pepper flakes and tomato paste.  Cook for 2 minutes. Stir in the milk, bring to simmer, cook 20 minutes. Stir occasionally, milk should be mostly evaporated. Add the wine, tomatoes, bay leaf, cheese rind and rest of salt. Bring to simmer, and cook slowly for two hours, stirring occasionally. The cheese rind will disappear.  Remove the bay leaf.

Set aside half the sauce for another day.  Cook the pasta until it is about 2 minutes from done. Add to the sauce, cook gently for 2-4 minutes until al dente. Add pasta water to thin it if necessary.  I used the pasta recipe from my favorite cookbook; by Annalise Roberts; Gluten Free Baking Classics.  I know, pasta is not baking, it is in the back section of miscellaneous stuff.  I rolled it in my machine and then folded the strips loosely before cutting into wide ribbons with a sharp knife. I cooked it about 3 minutes in boiling salted water.

Serve the pasta with the grated cheese. Or not; it is pretty good even without the topping. If you want to guild the lily, drizzle some high end ECOL on top of each serving before the cheese. Enjoy!