Sunday supper, wanting a pie to serve, no seasonal fruit available. Not interested in stone fruit imported from Chile or California/Florida berries.  So I turned to the partial bag of mixed berries in my freezer.  What I had wasn’t quite enough so I added a half cup frozen peaches chopped up.  T hey didn’t change the flavor much but added a bit more volume and a different color. The tart with the crumb and almond topping was delightful and yet subtle.  Not hugely sweet and quite pretty with the berries all cooked up. Winner!

I used Annalise Robert’s crust recipe and flour mixture. I think this crust tastes terrific and has a wonderful texture.  If it is chilled it is easy to handle and I like the pie bag for rolling it out thin and even. 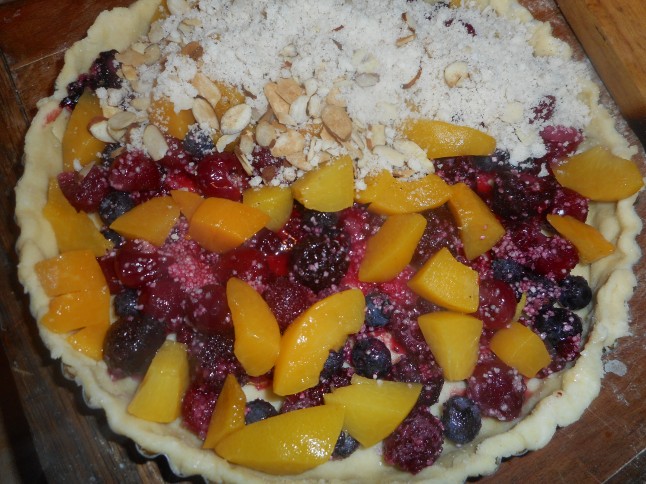 Taken as I sprinkled the almond crumb topping over the raw fruit. 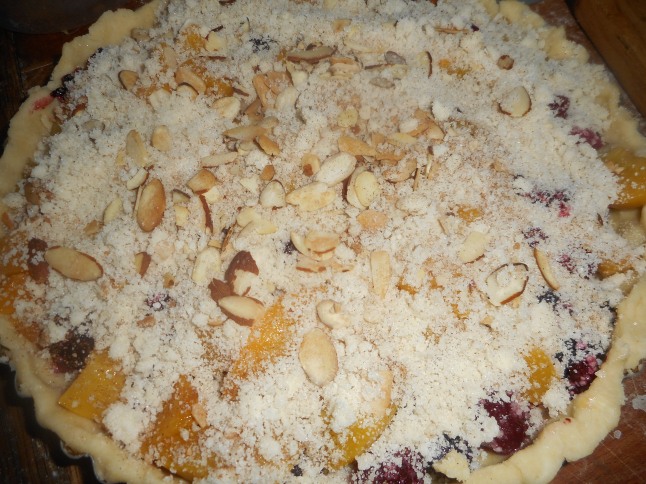 Ready for the oven!

Crust directions: Mix dry ingredients in bowl of stand electric mixer.  Add butter and mix until crumbly and resembling coarse meal.  Add egg and juice.  Mix until it comes together into big chunks.  Shape into a ball with your hands. Put it on a crust sized piece of wax paper (14 x 14 inches more or less), flatten the crust ball some; put on top of it another piece of wax paper and chill it all in your fridge 15-20 minutes.

Roll out ball of crust into a circle; I use my pie bag or between the two sheets of wax paper, try to get the thickness even, no thick middle! Peel off one side of paper and place in 9 inch tart pan, centered.  Remove other slice of wax paper.  Crimp edges all around.

2 1/2 cups mixed berries, mine were black sweet and sour red cherries, black berries, raspberries and blue berries if frozen let them defrost half way before using. I also chopped up the blackberries and bigger cherries.

Mix in a large bowl with:

Use one cup crumbs mixed with ½ tsp. cinnamon and ¼ cup thin sliced almonds.

I keep the rest of my crumbs in a tupperware in the fridge; keeps a month for sure.

Put the berries which have been mixed with tapioca, cinnamon and sugar into the pie shell, peaches too if used. It will just cover the bottom of the crust. Top with crumb mixture

Bake in a preheated 400 degree oven for 35 minutes until bubbly and the crust is light brown.  Cool at least 2 hours before serving warm or at room temperature. 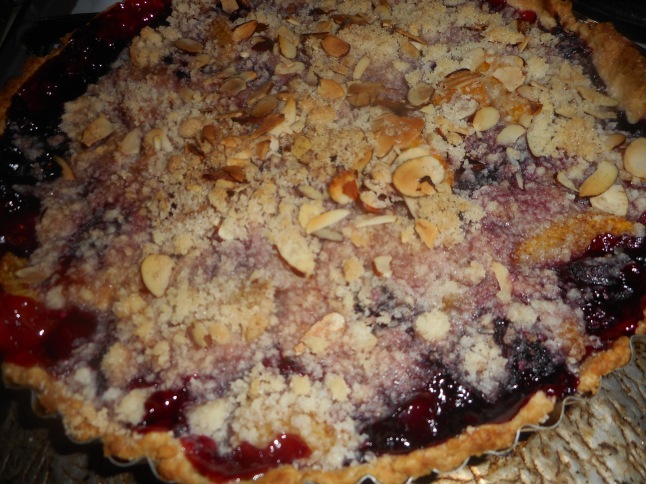 Note: I bake pies in my bottom heat pizza oven and it gives me a great browned crust.  If your oven isn’t bottom heat you might want to pre-bake the crust 10 minutes before filling and topping the fruit.

Great served with a scoop of vanilla ice cream.