Once at the Springtown Inn I had the most delicious seafood cakes, this was 8-9 years ago.  Well, to be honest, maybe twice I had them. Anyway, they were made with two or three different seafood proteins I think they had shrimp and crab but it was such a length of time that I can’t remember for sure.  Anyway, I had long wanted to create a similar dish.  Searched for a recipe and not finding one that was really close I took one from Food Network and modified it.  The recipe featured small sized cakes with a fresh salsa on top, made by Robert Irvine. I didn’t do the salsa and I made a few changes to the cakes.

I made them two different versions; lobster, shrimp and crab and one with flounder instead of the crab.  Both were easy to construct and delightful. The flavor is delicate and light. I didn’t make a sauce in the interest of that delicacy plus it was easier and included less calories. We agreed they were fine all alone but go right ahead and made a sauce of your choice. Mr. Irvine suggests a sauce of equal parts crème fresh and sour cream.  I might try that next time! 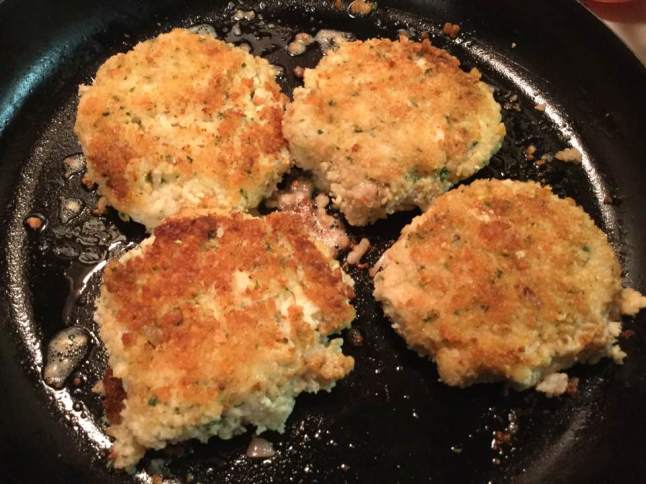 a 4oz. lobster tail, removed from shell and still raw

Half a lemon, zested

2 tbsp. finely grated parmesan cheese (I made one version without)

Chop the raw lobster tail into chunks. Put the seafood in a food processor, process briefly until fairly small particles but not even close to a paste.  Dump in a big bowl, add the shallots, parsley, bread crumbs, garlic powder, zest, mayo and cheese, stir to blend well. Don’t overblend; stop as soon as it seems fairly even. If you like; before stirring add salt and pepper to taste; maybe ½ tsp. sea salt, and ¼ tsp. pepper. Form into 4 cakes. If you want them crunchy on the outside gently press into some more bread crumbs to crumb both sides.  Put on a large plate and chill an hour so they hold their shape.

Heat the oil in a large non-stick skillet to hot and fry them about 3 minutes to a side; do not let burn!  I turned down the heat after a minute so they kept cooking but at a temperature less likely to turn them dark brown. But don’t use low temps or you will get a greasy cake!

Serve with some rice pilaf and your favorite vegetable; asparagus comes to mind! I made pea risotto which was divine.