Lots of September eggplants mean I am looking for great recipes to enjoy them to the fullest. This happens to be one of my favorite ways to do just that.  It is a vegetable curry, now don’t be put off by that; no long list of spices: only a couple and some fresh ginger in it and it isn’t too spicy or wild tasting. I have simplified it a bit and as a bonus I give you my best eggplant frying tip. Yeap, it is vegetarian but that can be a nice change of pace from all that meat. I serve it over brown rice and it is very satisfying. You can feel virtuous enjoying this savory entree and use all that fresh fall produce.

This recipe came from my favorite Indian cookbook Indian Cooking for Pleasure by Charmaine Solomon.  This 70’s bible for Indian cookery is out of print and very pricey to buy on line. I have used literally dozens of recipes from it. She knows her spices and chooses great recipes that always work.

You can use big fat eggplants as I did this time or smaller ones; you will just need more of them. These days there are many interesting smaller eggplant varieties; any will work here; just cube, no need to peel. 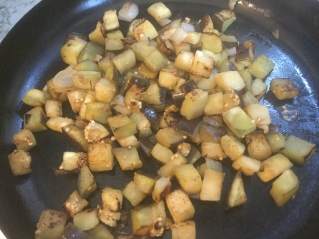 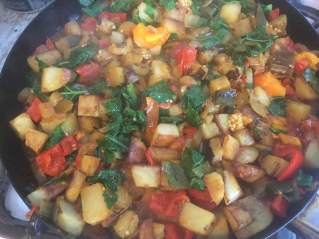 1 bunch spinach or a big handful of roughly chopped kale

1 ½ tsp. grated ginger, I freeze mine and just grate it frozen

½ tsp. ground turmeric; I did a rounded measurement; a tad more than level

Directions: Slice eggplants into ½ inch rounds and cut into cubes. Peel and dice the potatoes into a bit less than ½ inch rounds. Chop the tomatoes. Chop the onion. Seed and chop the peppers (you can use any level of spicy pepper you like; the original recipe said green chilies). Wash and chop the spinach or kale (I used kale this time; subs in great)

Heat 3 Tbsp. mild oil in a large frying pan. Fry the cubed potatoes until golden; you will need to turn them a few times. Remove from pan. Add the eggplant and fry until cooked; once the oil is soaked in I wait a half minute and add a couple tablespoons of water to the pan; let the water steam off and the eggplant should be done; if you have to do that again; go ahead. This trick saves adding a lot more oil to keep the eggplant from sticking/burning. When mostly done remove from pan.  It will cook more later so it is okay if edges and bits are not fully done.

Note: you could fry the eggplant at the same time in a separate pan to save a few minutes if you are in a hurry; might take a touch more oil that way; worked for me.

Then, add a touch more oil to the same (now empty) pan and pour in the chopped onion and fry until soft and turning golden. Add the cumin, turmeric and grated ginger. Fry for a minute, stirring. Add the chilies, tomatoes and salt, stir well and add back the eggplant and potatoes. Tip: when I make this in a wide 12 inch frying pan I don’t have a big enough lid; I use an upside down metal pizza pan and it makes a great lid.

Top with the spinach or kale. Stir after a minute, cover and cook on low heat for a few minutes until the spinach is soft, adding up to ½ cup water to keep it from sticking/burning. Add the brown sugar and cook the curry uncovered until it is thick; no more than 8-9 minutes. Serve with Indian bread or brown rice. As I haven’t really found time re-create my favorite Indian breads I served mine over brown rice.