My mom used to make a similar banana custard pie when I was in my thirties and I moved back to PA – lived close enough to come home some weekends; for some reason she never made it for us as kids.  I remember cutting up and setting the banana rounds in the baked pie shell for her.  The contrast of the rich custard, the flaky crust and the fluffy cream with the delicate banana flavor is just so memorable.    Today I used a shortbread crust for first time and it was very well received.  My grandson said it was my best pie ever! Easy as can be too!

Notes: I will freeze the egg whites to make angel food cake this winter. Waste not want not!!  In a past version I used a slightly different egg custard – both are delish!  This one might be slightly easier to construct and it sure got firm; I have had one or two failure custards that never did fully gel. I suppose you could use a box custard but this is infinitely superior.

Make the custard first as it takes a while to cool down. Next do the crust.  Don’t do the bananas until you are ready to pour the custard. The whipped cream should be make right before you use it. 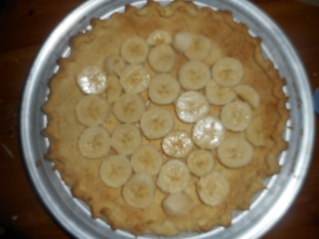 This is an old shot from last time I made it; slightly different crust but I wanted you to get the idea of the sliced bananas.

Another older picture; lots of creamy custard with banana treasure in there!

2 cups whole milk or 2 percent, no lower fat than that

Directions: Beat the egg yolks until thick; add the sugar in a slow stream. Heat the milk in a 1 ½ qt sauce pan, add the cornstarch and salt to the egg/sugar mix; then add the hot milk in a slow stream beat/stir with a metal whisk as it heats. Pour it all back into the saucepan and cook on medium low heat, stirring constantly with a wire whisk. Once it reaches a boil; turn heat down to low and time it for one minute, STIRRING CONSTANTLY.  Add the butter and stir as it melts, then the vanilla, stir.  Pour into a mixing bowl, let cool a bit and then put a film of plastic wrap on the top; press it down onto the custard.  Chill at least an hour before using. Do not use until cold.

CRUST: I am still not rolling out pie crust;  so I made a crumb filling like shortbread cookies using my stand mixer:

Mix in stand mixer and add 5 Tbsp. cold butter cut up in 6-7 pieces; blend until crumbly and press in pie pan

Bake in a preheated 350 degree oven for 17-18 minutes until the crust is light brown.  Cool at least 30 minutes.

Cut peeled bananas into 1/3-1/2 inch rounds and cover the bottom of the pie crust with them close together.  Pour the custard over the sliced fruit and smooth the top.

Chill pie 1- 4 hours before slicing and serving cold topped with a big dollop of whipped cream.  Note: I confess we didn’t do this step of chilling it; we ate it right away as there was no time for chillin.

Whipped cream: Beat cold whipping cream with an electric mixer until it holds soft peaks; add 2 Tbsp. powdered sugar and ½ tsp. vanilla.  Do not beat any more, just stir the sugar in. I didn’t bother with vanilla; made this part in my mom’s assisted living room; left the vanilla bottle at home. Still great.

I think it is best served the same day you make it, or no more than 12 hours after baking for optimal flavor.  The crust will get soggy if too much time passes. Mine was still very good the next day; just not as great as when really fresh.

Note: I froze my egg whites for later use in a cake. No wasting them, that’s for sure!