So, I have been craving pizza for almost two months. Just didn’t fit into my meal schedule. But I had to chow down on a slice or two and soon. This past Saturday we went for a walk on the rail train and then ordered some take out GF pizza. It was from a pizza parlor here in Hellertown that has a sign in their window. That would be how I knew GF pizza was available there. I had called earlier to see how long it would take; they told me 15 to 20 minutes which seemed short to me for a fresh GF crust… So I was a tad skeptical…still we ordered – just one size; half plain and half with mushrooms. We both love shrooms but a plain pizza is the acid test, as it were.

I need to digress and say that I am very particular about my pizza. I have found one place in the Lehigh Valley that makes exceptional pizza; Martellucci’s in Bethlehem on Easton Avenue. My mouth waters when I think of their pizza!! Yet, up in the Poconos; in East Stroudsburg on Crystal Avenue is Tony’s Pizza, the best thin crust pizza outside of NYC to my mind… Pizza crust so good I never save any for the dog. He is kinda ticked about that as he loves pizza crust. So that was what I was hoping for but I think I knew there was no way this GF pizza could measure up to either of those stellar pizzas…..

So anyhew, I went in to pick it up and happened to speak briefly with the owner. He told me he had tried to make his own GF pizza dough; made many failed efforts and finally gave up. The solution is that he buys the shells frozen and ready to top and bake. He gives you a free plastic pizza cutter to keep from contaminating the pizza with his cutters for which I was very thankful and impressed by.

Not so impressed with the pie we got. First of all it was quite underdone. The cheese was barely melted, pale white and flaccid. The sauce underneath was thick and unflavored with basil or oregano much less any garlic or the like. The mushrooms were fine if undistinguished. And the crust seemed to have a middle layor of somewhat raw dough, ick!

It came on its own heavy duty aluminum foil baking pan which reassured me that it was not coated with wheat flour on the bottom. We ate a slice, made disappointed faces, and then I had the brilliant idea to fix it up and bake it a bit more. So I sprinkled it with basil and oregano, and some red pepper flakes. I put on a few pepperoni slices to punch it up and put the plate and pie in the oven for a few minutes. The resulting pie was much improved. I should note that the crust is a bit like a bar pizza; thin and cracker-like.

So, Mr. Pizza shop owner; punch up that sauce with herbs and some good olive oil, spread it thin and bake the pie until the cheese starts to brown a tad; golden at least. If those minor changes can be made it isn’t half bad – I would get it again for sure!

Now, to learn how to make my own GF crust and top with cheese and shrooms. It would not be made like I used to make my crust; no stretching and rolling…but, still… a fresh crust pizza that I can safely enjoy! A lovely dream to bring to life in my GF lifestyle.

Stay tuned for part two which is my update on 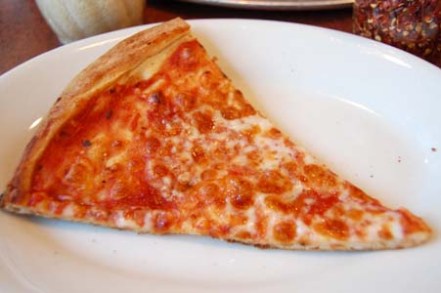