The ultimate perfect old school pie… so yummy and all you really need to make is some custard. I changed up my crust from a traditional flaky crust to a gf chocolate cookie crust that I bought at Wegmans. You can too and save the time you would have spent making a crust. No baking for me this time: no hot oven!

My mom used to make this pie when I was in my early adulthood; for some reason she never made it for us as little kids.  I used to cut up and set the banana rounds in the flaky baked pie shell for her.  She never used a chocolate crust so this is a slightly different take on this custard pie. The contrast of the rich custard, the crunchy chocolate crust and the fluffy cream with the delicate banana flavor is just so memorable.  And if you can make custard this pie is simple. I assume you could use a box pudding but I highly recommend this traditional stove top egg custard, straight out of Betty Crocker’s 1978 cookbook. 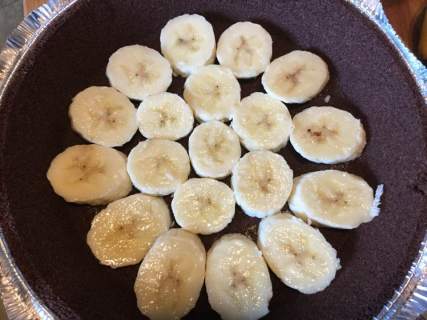 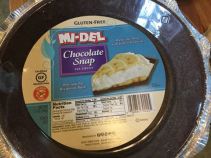 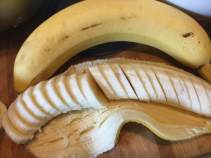 3 cups whole milk or 2 percent, no lower fat than that

Directions: Mix the dry ingredients in a 1 ½ qt sauce pan, Add the milk and stir constantly as it heats.  Once it reaches a boil time it for one minute. My secret trick is that if I don’t feel it was fully boiling when I started my minute; I add another minute to the process to be sure it is going to turn out thick. Stirring as it boils is mandatory; not the time to walk away from this process.  Then add 1/3 of the hot custard to the egg yolks as you stir, stir some more and return all to the pan, bring back to boil and time for one minute, yeap: stirring constantly.  Add the butter and stir as it melts, then the vanilla, stir.  Pour into a mixing bowl, cool five minutes and then put a film of plastic wrap on the top; press it down onto the custard. let cool a while more; maybe 30 minutes Chill in refrigerator at least an hour before using. 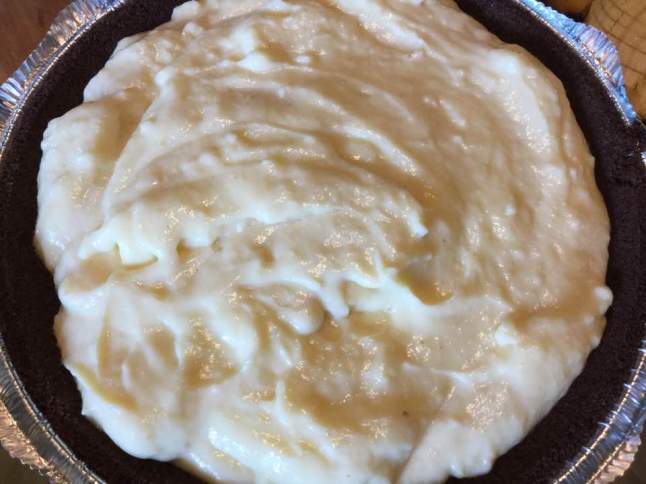 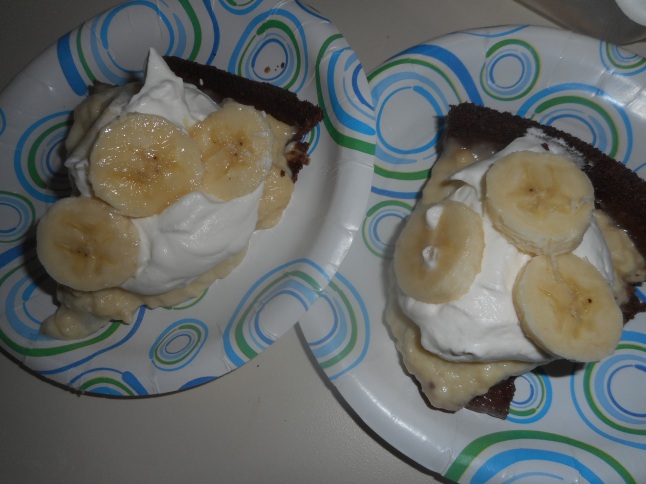 These slices were served a day after I made it.  Still yummy.  Forgive the paper plates and the poor quality picture. My mom’s room is not the best place for taking pix!

Cut peeled bananas into 1/2 inch rounds and cover the bottom of the pie crust with them close together.  Pour the custard over the sliced fruit and smooth the top.

Whipped cream: Beat 1 cup cold whipping cream with an electric mixer until it holds soft peaks; add a quarter cup powdered sugar and ½ tsp. vanilla.  Do not beat any more, just stir in.

I think it is best served the same day you make it, or no more then 12 hours after assembly for optimal flavor.  The crust will get soggy if too much time passes. Mine was still very good the next day; just not as great a crust as when really fresh.  I like to top my slices of pie with extra rounds of banana to up the nanner flavor.  I liked the chocolate crust but I think I might go back to a homemade crust; either a flaky one or maybe one made with gf gingersnaps. Now that sounds like a winner!

Note: I froze my egg whites for later use in a cake. No wasting them, that’s for sure.