Finding or baking decent gf bread can be problematic.  Poor texture (think crumbly), slightly odd flavors, big holes in the middle of the loaf, leaden or brick like baked products, high prices and lots of ingredients which must be compiled exactly according to the recipe.  It adds up to a fair amount of stress as to just having a sandwich.

A year ago I made some really interesting bread/rolls.  The name is “cloud bread” (also called oopsie bread) and it has no flour, no oats nor any grains.  I was intrigued when I saw this cloud bread popping up in my support group messages and just had to try it. My recipe has five ingredients but three should be in your pantry already.  It was very easy, quick and yes; tasty.  So it made a super bread for a ham and cheese sandwich and a ham/turkey and cheese sandwich.  I ate one warm out of the oven, also enjoyable. Great with a little jam or jelly on top.  Posted it back last March and sharing again so you who missed it can give it a try.

I added a couple toppings which add a lot to the flavor and look of it.  I recommend them but it sure can be made plain.   You have to use full fat cream cheese to make it work, only a few tablespoons so don’t get all freaked out over that issue!

Toppings; sesame seeds and a tbsp. of chopped fresh rosemary.

Beat the egg yolks with the cream cheese until it is very smooth, lemon yellow. Add the baking powder and honey, beat in.

Beat the egg whites until foamy, add a sprinkle of salt. Beat until stiff peaks form.  Fold together with the yolk mixture until mostly blended together.

While the egg whites were beating I lined a big baking sheet with parchment paper and sprayed it lightly with Pam.  Heat oven to 300 degrees. Some people heat the pan in the oven before spreading the dough; I didn’t bother but feel free to preheat your pan.

Using a big spoon spread the bread mixture on in six big circles spaced 1-2 inches apart.  Sprinkle with sesame seeds and or finely chopped fresh rosemary. Bake until golden brown between 20 and 30 minutes.  Using a spatula separate them from the parchment paper. Let cool.  Store in a ziplock bag overnight; they will get soft and be ready for sandwiches.  Keep them in the fridge. I put slices of wax paper between them to avoid sticking.  They keep about 3 days there and a week in the freezer.  Wonderful for sandwiches: I used one for the top and a second one as the bottom of the sandwich.  Did I mention they are virtually no carbs in this bread? Yeap; great for my low carbing friends! 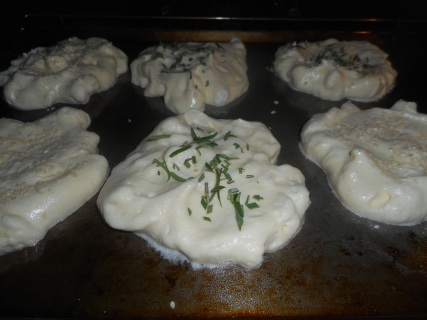 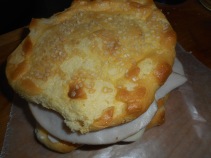 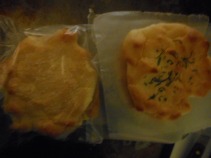 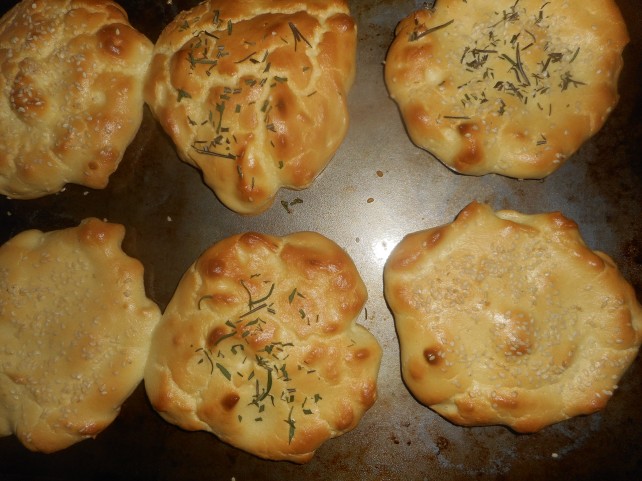