Another stormy day!  It’s time for another hearty one pot meal.  This one is my multi-bean soup with Italian sausage.  I started with a 1.3 lb bag of 4 bean mix and added two kinds of lentil and a bit of a few others.  The thing is, if you have celiac most 16 or 15 bean mixtures for soups contain barley which we are hugely allergic to.  I found a four bean mix out at Echo Hill country store (Berks County) and added some French lentils; maybe ¼ a cup and some red lentils; another ¼ cup plus a ¼ cup of dried garbanzo beans and a sprinkling of dried limas.  You can use what ever blend you like but I like a good mix for a rich thick stew.  (NOTE: this most recent version used a 15 bean blend I found at Giant grocery store that was marked gf.  I did not use the seasoning packet that came with it.)

My soup has Italian sausage but you can leave that out if you want a vegetarian version. I personally love sausage in a bean stew. Gives you lots of meaty flavor and a healthy dose of protein. I am guessing you could use other things like smoky ham chunks or maybe a ham hock? In this latest version I used smoked bratwurst instead of Italian sausage,  good but I really love it with Italian Sausage.

I enjoyed a hot bowl of this pottage with a slice of toasted multigrain gf bread.  It made a full meal without anything else being necessary.   A fresh crunchy salad would go well if you want to round your dining experience out with some greens! 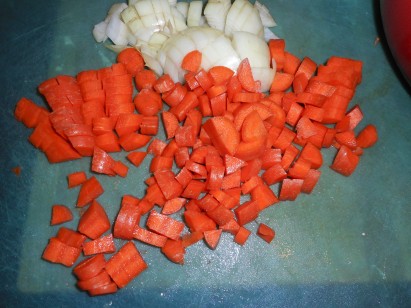 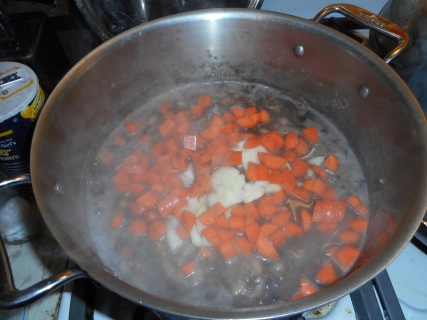 Soak 1 pound 4 oz (typical bag size) of dried mixed beans in filtered water to cover.  Soak it for an hour or try the overnight treatment.  If you use separate types of beans, follow these directions as lentils don’t need a soak.  I set the lentils aside and added them after the soaking as they don’t need the same treatment the other beans need.  Either bring to a boil and let stand an hour or just let stand in the cold water overnight.  I did the quick version.  Be sure to drain them well and rinse before returning the swollen legumes to the rinsed pot.  Cover with fresh filtered water and add a bay leaf.  Cook 1 hour, pour in more water as needed and stir so it doesn’t stick or burn.  Then, add the lentils and cook another hour until the beans are nearly tender.  It is hard to say when beans get done, depends on a number of factors, taste often to check for tenderness. And stir that pot! As they approach that almost done spot start the rest of the dish, get everything chopped up and ready to toss in when the beans have reached the two hour mark.

Add the veggies to the pot, stir and cook 10 minutes. Stir occasionally. Add water if needed.  I like the soup thick but it can’t be solid so add water.

As that cooks, start the sausage.  Sauté one lb Italian sausage: brown in a Teflon pan with a touch of olive oil until top and bottom are browned and sausage is mostly done. Let cool a bit and slice into rounds or chunks, set aside.  In my latest version I used fully cooked smoked bratwurst and so I skipped this step; just cut it into rounds and added it in the last 15 minutes of cooking.

Add the following to the soup:

½ a 14 ounce can of spicy diced tomatoes

½ bunch of kale leaves cut into big shreds; I cut off the bigger stems as they can be tough.

Cook ten minutes, add more water if it gets too thick. Stir occasionally.  Taste and add more spice if you think the soup needs more. Add the sliced sausage or bratwurst and cook five – ten minutes more.  A total cooking time could be from 2.5-3 hours, depending on your beans.  If they have been sitting in the pantry for many months they take longer to cook to a tender texture.

Taste and add more salt/pepper as you see necessary.  Let stand 5-10 minutes before ladling out.  Now that is comfort food that is good for you too!

One thought on “15 Bean Storm Soup”